Ultimate Dragoon is a Left Spin Beyblade. It was released with a blue Left-Spin EZ Shooter and a blue Winder by Takara as a Starter Set in Japan. It was later released internationally by Hasbro sometime in 2002.

Cross Dragon is the first Attack Ring ever produced and the first for a Dragoon Beyblade. The center is circular and has four dull protruding spikes arranged to resemble a cross, hence its name. Each spike is designed to resemble a dragon's head with three horns and a long, rectangular curved snout. Cross Dragon is decorated with four thin and curved holographic red stickers, placed between each of the spikes.

Flat is the first Blade Base ever produced. It is white, has a circular and flat tip and is made out of plastic.

Its gimmick lies within its namesake; the flat tip, which causes the Blade to move at wide and fast speeds, which are ideal for Attack Types. While plastic tips do not provide much tractions on Beystadiums, compared to those made of stronger materials like rubber, they offer longer endurance and spin time. 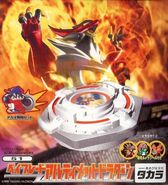 Second Hasbro packaging.
Add a photo to this gallery 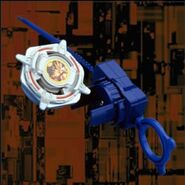 Spin Dragoon appears briefly in Back to Basics in a flashback of Tyson's childhood. It was Tyson Granger's first Beyblade.

Spin Dragoon plays a major part in the manga, being Tyson's first Beyblade. Tyson is given the Bit-Beast, Dragoon, as part of a test made by Jin of The Gale and it enters Tyson's Blade. He then uses it to defeat Carlos and the remaining Blade Sharks. However, Spin Dragoon gets destroyed. Despite this, the Bit-Beast of Spin Dragoon survived and Jin gives it back to him, allowing Tyson to keep it. Tyson then lets Dragoon inside his new Beyblade: the successor of Spin Dragoon, Dragoon Grip Attacker.

The parts of this Beyblade can be bought in the Jisedai Begoma Battle Beyblade game.

Retrieved from "https://beyblade.fandom.com/wiki/Ultimate_Dragoon?oldid=445509"
Community content is available under CC-BY-SA unless otherwise noted.