Ultimate Gravity Destroyer Stamina GB145S is a Stamina-type Beyblade that was originally released in the Perseus Reshuffle Set. It was then released in the Beyblade: Metal Masters video game in the Best Buy Collectors Edition with a gold facebolt. It was released again by Hasbro in April 2012 with normal packaging. It was re-released in the Gravity Brave Attack Hasbro 2-Pack with Grand Pegasus 85MB.

The Face Bolt depicts "Perseus", one of the 88 constellations in space. In Greek mythology, Perseus was a hero who slayed the evil Gorgon Medusa and saved the Princess Andromeda from a sea monster sent by the God of the Sea, Poseidon. Despite it representing Perseus, the design showcases the helmet of a Roman gladiator with the name, "Perseus" beneath it in a blurred manner colored white, while tattooed on a translucent yellow Face Bolt.

Destroyer is a translucent black with purple highlights. Unlike any other Energy Ring, Destroyer is the only Ring that does not use any plastic designed to block the prongs on Right and Left-Spin Launchers. This allows it to be used with Gravity for Dual-Spin. Also, like the L-Drago Beys, it can be rotated 180 degrees to switch between Defense Mode and Counter Mode.

Destroyer has three-protrusions that form a triangular-like shape, with three curved protrusions between it. The original release was a translucent black with purple highlights. This release is black with yellow/gold highlights.

Gravity is colored a metallic black and is a circular Wheel. It features three curved pockets meant for the Destroyer Energy Ring to rest on with two holes on each pocket for a total of six holes. The pockets also form the three sides of a triangle as well. Between the three pockets however, are three jagged protrusions with three red dot stickers, which are meant to emulate the face of Medusa. These jagged protrusions also serve as pockets for the Destroyer Ring to rest on and have a "V-Shaped" protrusion as well. In a side-view, Gravity is quite thick with five sharp designs protruding upward around the pockets.

Gravity's gimmick is it's Dual-Spin ability, made for Right-Spin and Left-Spin. This is possible as Gravity does not contain the walls that block it from being inserted to an opposite-spin Launcher. The only other Wheel compatible for Dual-Spin is Variares.

Gravity has four Modes, Right-Spin Defense, Right-Spin Counter, Left-Spin Defense, and Left-Spin Counter; but generally as Defense Mode and Counter Mode. In Defense Mode, the three holes are visible and in Counter Mode, the three holes are covered. Performance-wise in Defense Mode, the plastic indents of Destroyer cover the jagged protrusions which increases metal on plastic collisions, creating less recoil. In Counter Mode, the jagged protrusions are visible and Destroyer does not come into any contact; this maximizes Gravity's surface area and increases Smash Attack.

Although Gravity was labeled as a Defense-Wheel, it suffers from recoil in battle. Recoil is never a plus for Defense so because of this, Gravity has found it's real use in Attack. Although there is no recommended Mode for Gravity, it features high and powerful Smash Attack capability and has become top-tier as a result. Ranking amongst Wheels such as Beat, Variares, and Fang. It should be worth to note that Gravity has more consistent Smash Attack in Right-Spin therefore, Left-Spin should only be used against Defense-customs with rubber-based Tips such as RS and CS. The original release was metallic black. This release is metallic gold.

GB145 is a wide, round Track featuring two free moving metal balls. These balls move toward the outside of the Track while spinning, causing additional spin retaining force which increases stamina, similar to Draciel Metal Ball Defender's Metal Ball Base from the plastic generation. Weighing in at 4.5 grams, GB145 is currently the third heaviest Track available, and as such is extremely useful in Defense customizations. However, because it lacks energy-absorbing free spinning wings, it is not as effective as C145 against low attackers such as Quetzalcoatl 90WF.

Where GB145 does shine is when it is utilized in Defense customizations against high CH120-based Attackers, such as MF Lightning L-Drago CH120RF. These types of Attackers do not aim to hit the Track, and thus the free spinning claws of C145 are not necessary, and you instead get a significant increase in the overall weight of the customization. It's good when used in Attack customization like Ray Capricorn GB145MF. It can also be extremely effective in this Defense combo: MF-H Basalt (twisted) Capricorn GB145 RS/ES/BS.

Note: If you shake the Random Booster Vol. 4 Mirage Virgo and it rattles, there is a high chance you will get an Earth Virgo GB145BS. The rattling sound is caused by the balls in GB145, this is a good way to obtain Earth Virgo or you could get the Sonokong version, if the package wasn't a box and a bag, you could feel the package and if you felt a large Track then its likely to be GB145 and that only comes with 1 bey of its series, or you can feel its weight. If you could feel an oval shaped track, it should be GB145.

PS: Do not rely too much on shaking the box. You might get other beys with ES bottoms e.g. Earth Cancer DF145ES, Flame Aquila 100ES since of the metal bar that wobbles. All RBV4 that has the Earth Virgo has a thin cardboard slit through the small holes of the GB145, thus not making any sound, never rely on shaking the box.

The Sharp Bottom offers very little movement and as such provides no Attack potential. The pointed Tip allows for very little friction between the Bottom and the stadium surface, which helps prevent the loss of spin velocity. However, due to the fine nature of the Tip, the bottom is easily knocked off balance, and hence is outclassed by superior alternatives such as WD/SD/D/EWD/SWD or PD. This Tip is outclassed and deemed pathetic among Stamina types. It is not as powerful as an ES or any other Stamina type Performance Tips.

Because of its poor balance, when used with C145, SW145 , GB145 or Other Such Tracks, the Track usually touches the floor when hit with a strong Attack which will cause it to lose Stamina and Balance. Although It is Severly Outclassed It is still applicable for some stamina Customs (To A little Extent). 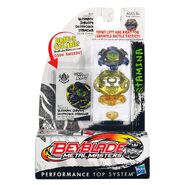 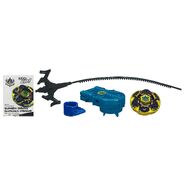 Retrieved from "https://beyblade.fandom.com/wiki/Ultimate_Gravity_Destroyer_Stamina_GB145S?oldid=343319"
Community content is available under CC-BY-SA unless otherwise noted.