Ultimate Meteo L-Drago Absorb DF105LRF is a variation of Meteo L-Drago LW105LF released by Hasbro in early 2012. It is the Hasbro counterpart to the same Bey released in Takara Tomy's Ultimate L-Drago Reshuffle Set.

The face bolt depicts "Draco", one of the 88 constellations in space.

The Energy Ring, like L-Drago, features three dragon heads. Unlike L-Drago, L-Drago II contains rubber, mostly covering the circumference of the Energy Ring, and partially covering the top. It also has the logo of the Shadow Bladers, which is missing one wing on the place which surrounds the facebolt. The rubber is good for deflecting attacks of other beys when it clashes with them. Since it is an L-Drago beyblade, it is wider than all energy rings and also since it is made out of heavy rubber it is the heaviest energy ring.

This version of L-Drago II has soft rubber instead of hard rubber like the original L-Drago II so it has a greater capacity for Spin Stealing. Also contrasting to the first L-Drago Energy Ring, L-Drago II has "tribal" patterns upon the dragon heads, and between the gaps in which the prongs for the launcher are placed. The use of rubber allows for the increased ability for L-Drago II to "pain split" with an opposing right spin Beyblade. This increase in Spin Stealing capabilities has not lowered L-Drago II's Smash Attack, as the shape of the rubber is able to provide Smash Attack. This also makes it hard for unbalanced tops to defeat Meteo L-Drago.

Like other Beyblades such as Lightning L-Drago 100HF, Gravity Destroyer AD145WD and L-Drago Destroy F:S, Meteo and L-Drago II are only compatible with one another. L-Drago Absorb akin to L-Drago, is exclusively left spin and also has the mode change function. These modes are Assault Mode in which the heads of L-Drago Absorb cover the blue protrusions (claws) of Meteo and Barrage Mode in which the heads of L-Drago II cover the silver protrusions (jaws) of Meteo.

Barrage Mode has been proven to be superior to Assault Mode, as the revealed jagged claws give Meteo L-Drago more grip on the opposing bey, thus increasing its Spin-Stealing ability. In addition, this mode of Meteo L-Drago is the best at absorbing attacks, so it is possibly the best Meteo L-Drago energy ring. However, it is not recommended to use this against left spin beys, the rubber will act like brakes and stop L-Drago from spinning.

Meteo features six protrusions of an alternating pattern between silver jaws and blue jaws. It is quite a small Fusion Wheel, revealing more rubber on L-Drago II for Spin Steal. The silver jaw is smoother, as opposed to the rugged appearance of the blue jaw. In Assault Mode, Meteo L-Drago is better against Left-Spinning Beyblades, as it does not grip onto the Fusion Wheel, which slows it down.

Down Force 105 is like the opposite of Wing 105. Aside from the height, Down Force 105 has four wings that are meant to provide extra weight and push air upwards in left spin, while Wing 105 is meant to push air upwards in right spin. However, the effect is negligible, but this Track Still Outclasses 100/105/W105/LW105. DF105 is a good track, but outclassed by 85/90. The Down Force ability allows Ultimate Meteo L-Drago Absorb to absorb most of its enemies with its low height and slightly increased stamina.

This Tip makes the Beyblade more aggressive when spinning to the left, rather than when spinning to the right which its counterpart, Right Rubber Flat, does. It is the rubber version of LF. It provides high speed and aggressive movement, however there is a downside. Despite its fast movement, it hardly leaves the Beyblade with enough Stamina to defeat its opponent. Overall, Left Rubber Flat is a great tip for Attack-Types, severly outclassing its counterpart, R2F. Just like R2F, it has a star-like shape in the rubber and should wear down after a few battles.

It is a translucent blue in color for the plastic, with pink for the rubber. Another downside with a rubber tip is that the beyblade itself will only force the beyblade to attack with hardly any defense.

The tip has comparable stamina to a rubber right flat. It works well on Beyblades. 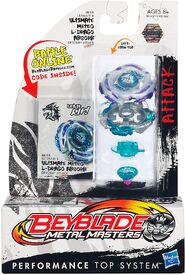 Add a photo to this gallery
Retrieved from "https://beyblade.fandom.com/wiki/Ultimate_Meteo_L-Drago_Absorb_DF105LRF?oldid=313952"
Community content is available under CC-BY-SA unless otherwise noted.