The Face Bolt depicts Draco, one of the 88 constellations in the galaxy/space. It features a further stylized version of the first L-Drago Face Bolt: the "L-Drago" text present on the prior L-Drago face has been removed, however, it has been replaced by a clawed hand-like design. The motif is featured on a translucent blue facebolt.

This Energy Ring has two modes, just like most other L-Drago rings. Its first mode causes the heads of L-Drago to cover the silver jaw on the Meteo Fusion Wheel while the three barrage attack blades stick out. The second mode causes the L-Drago heads to hover slightly above the barrage blades, while the silver jaws stick out. This version however, is unable to steal spin strength just like the L-Drago II Rush Ver. Energy Ring.

Meteo features six protrusions of an alternating pattern between silver jaws and gold jaws. It is quite a small Fusion Wheel, revealing more rubber on L-Drago II for Spin Steal. The silver jaw is smoother, as opposed to the rugged appearance of the blue jaw. In Assault Mode, Meteo L-Drago is better against Left-Spinning Beyblades, as it does not grip onto the Fusion Wheel, which slows it down.

The 85 Spin Track is the lowest Track currently available. It unfortunately has floor scrapes because of its height. Due to its scrapes, it has incredibly low Stamina. Also, it throws large, wide and heavy Fusion Wheels off. Diablo 85 is a horrible combo. Use with wheels like Cyclone, Thermal, and Mercury. But fortunately, because of it's extremely low height, it has amazing Attack properties, for it can strike opponents Track easily, and use Upper Attacks with ease. Overall, this Track should only be used for Attack customs, or just for collection. Only use this Spin Track with beyblades that have a light weight Fusion Wheel.

XF is the second widest Flat Performance Tip available (first being GF). XF has as good performance as Rubber Flat in terms of Attack potential, since it is made of plastic, it has less grip on the stadium. Its Stamina is very bad and all Attack-Type Performance Tips can outspin it. Since it's so wide, it cannot perform the Sliding Shoot's pattern. It is the fastest non-4D bottom. However, when it reaches the middle, the Stamina/Defense of the bey would be weakened considerably. This is significantly true when used by Meteo L-Drago LW105LF to absorb and defeat the already weakened Beyblade in the center. In conclusion, it is a very fast bottom but extremely risky to use. 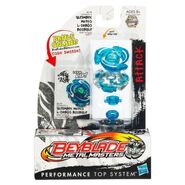 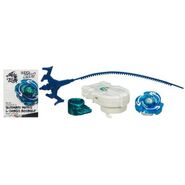 Retrieved from "https://beyblade.fandom.com/wiki/Ultimate_Meteo_L-Drago_Assault_85XF?oldid=313953"
Community content is available under CC-BY-SA unless otherwise noted.