Unicolyon is a pastel magenta Beyblade with a Bit Chip depicting Unicolyon. It has a bi-symmetrical Attack Ring, that closely resembles two Unicolyon heads. The Weigh Disk could be an Eight Wide. Like most of the Beyblades featured in Beyblade: 2000, it contains a Right Spin Gear. The Blade Base is a Wide Sharp and is also bi-symmetrical. 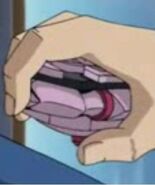 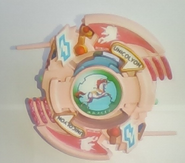 Retrieved from "https://beyblade.fandom.com/wiki/Unicolyon?oldid=438414"
Community content is available under CC-BY-SA unless otherwise noted.