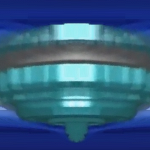 Beyblade is my hobbie, as soon as it came to my life, I realised that it was going to be something that will last until the end of my days.

I must say I was first a designer (or artist) and then an editor. I didn't have intention to remain here, but after a few articles, I found really interesting this wiki.

This is a nice place with people that share beyblade passion and that is enough reason to carry on editing.

As many other editors here, I would like to be callen an "Original series expert" (OSE)

The reason: I haven't seen "Metal saga" or neither "BeyWheelz"

At my age I won't see those animes.

I do them from zero, don't ensamble them, I manufacture beys Plastic gen beyblades, but my blades are made of wood (except from weight disk) all are interchangable parts(except from spin gear that is incorporated to the base) If you would like to see what I did, see "The list" 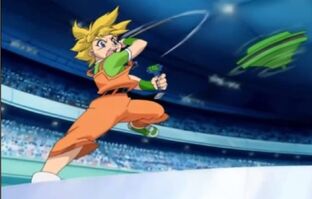 As I described on "About me", I like not released original series beyblades

About me, about blades..

The story about blades and me come from 2002. When thanks to 2002 fifa world cup, my father decided to pay for cable TV. Before that I wasn't able to see any other known anime series.

I was going to end my childhood when beyblade arrived..

I first thought it was some foolish serie, about tops?! what a h.ck?!

But I got completely attracted to that serie, It marked my life.

I have never had an original beyblade, 'cose those were too expensive for me.

Thanks to that, I was impulsed to perform my own blades. I took tools for first time, I put effort and passion and I learned technic.

Then with all the money I got I bought a blade, It wasn't original. The only thing that worth was the attack ring, it was Driger V2, then I bought Gaia Dragoon, Draciel V2, Dranzer V2 (all from the same brand, and just AR). The anime continued and I didn't know the attack rings I had in my power 'cose I didn't reached the episodes where those were shown..some got broken, others I tried to change appearence and I actually screw them up. If I would known before..

After some years, my bro and I got other few beyblades, with all the parts. But for me it wasn't as good as performing it myself. Following creative line, I made my first blade(It didn't have SG and, weight disk and bit chip were from other blades)

The blade had a round attack ring and a tin (Sn) tip (which I did myself), base was made of wood, It was quite a good piece of work!! Also in battle (on beystadium) beat every blade we got.

When anime finished, It was all. I carried on two years performing blades, I did Draciel F to eye. I copied AR from a little picture I found.

I realized I did a good job, and I was good at coping.

But with no pic or info to do copies from, It was impossible. I started at university and that was like the end of all. I burried that part of my life.

I was going to became a man and I had to stop that boys toys and carry on living. It supposed to be like that. I had some days when I felt like taking all again but when I pick up my beyblade box and I oppened it, I saw all maimed (for me) parts and a bad feeling came to me again. That was a game, doing toys and I had to stop it. It was a non-productive activity and it was a dead end.

Life carried on and I don't know why, one day I saw on internet 1st chapter...

...then the second... then V-Force and I finished with G-Revolution. I had forgot that feeling, and in that moment it came back.

I realized I had a big weapon on my hands I didn't have before, the Internet. I had never seen an original blade before.

It was a new world.

All "info" I didn't have, in that moment appeared, it was like a golden road. I could make stop on videos!

I could see all those blades, their perfect forms and details. The ones I couldn't see on TV.

Then the hobbie reappeared.

Making blades was an attraction I had, and In the very moment I realized it was just a hobbie, I decided to make known blades from zero, and those blades would have to be not manufactured (not released) blades.

Why to do beyblades that has already done?

Some may consider that I wasted my time, and also I dealed with that feeling. But I took just like a hobbie. I don't harm anybody doing that. I have time after my responsabilities, so why not to do it?

I performed some in this time, then looking on the internet, I have seen some other people that have done blades, with different technics. I admire that, I would like to inspire other guys doing their own blades.

I guess using a completely own blade should be the best. I just guess, because I don't like blading, I only like doing funtional blades with the info of the anime.

I made myself user in this page to add the info I took from the anime, in order to show you the blades I made are as similar as I could.

"The list" is a proyect that involve 11 remarkable beyblades(for me), this has per objective to perform some blades that haven't been maunfactured by plastic industry 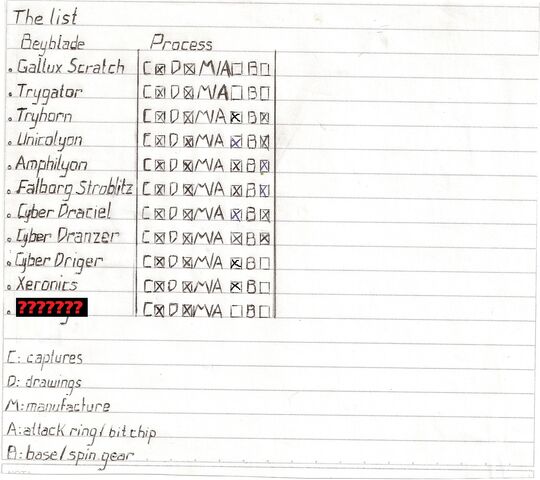 There are a lot of ways of doing beyblades, here I describe mine. It doesn't mean It's the only way.

Other thing I would like to emphasize is that if you don't have enought age to use tools, don't take this as a recipe or try this at home

It took time to improve my technic. There were some things that I used to do in a different way. But steps one and two are always the same. Instead of step three that differs depending on the parts.

It's easy, you have to collect every graphic information of the blade you want to perform. Wiki helps with it, if you don't find the necessary amount of pictures here, you can't check in which episodes the blade appear and then you search directly on the anime. I uploaded here some of the missing photos I used.

2D drawings of the blade by hand, with paper and pencil. It could de consider as a difficult step, but I find it very easy

It requires 3D to 2D vision. You also need to be focus to proportion and common measures.

For example, bit holder from the AR(attack ring) has the same length for every blade (12 millimeters)(yes, MKS...) Taking this in consideration, you can measure some 3D lengths. There are a lot of common lengths to take reference from, other example is the external radius of the lancher hole, it is 15mm.

For Plastic Gen beyblades you need only two views:

1- Upper view: with this view you can do the Attack Ring(AR)

2- Lateral view: with this view you can do the Blade Base (BB)

To do the circle around the bit sticker, I use two component putty. And for all the stickers I used the program "Paint". The combination of bit colours is from the 1st step pictures, I choose the ones that can't be seen on photos.

A) Cutting the shape: A piece of paper of the upper view is cut, until the contour. Then it is glued to a MDF(Medium Density Fiberboard). Then I cut it with a hacksaw. After that I make the central hole of the AR by using a cutter, I do it extremelly carefully (I had a serious accident with this tool before). I left space for the lapels. 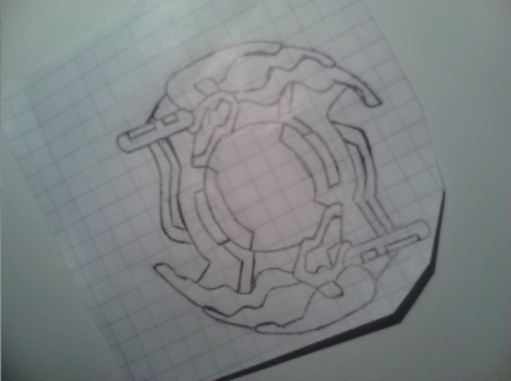 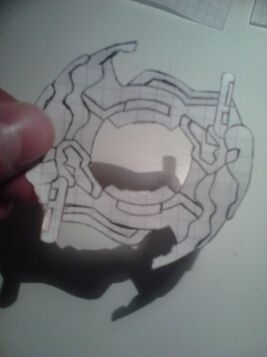 B) Relief: Relief consist on adding putty to the MDF cut on "step A)". It is the most difficult part of the process. To apply the putty, I use a piece of metal, that has to be wet before. If I don't wet the metal, putty will remain on the metal piece instead of the MDF. If I over-wet the piece, i remove water with a paper napkin. The putty dry up completely after 24 hs, but it stops being mallable about one and a half hour after I mix the two components. This step is difficult because you have to be concentrated for more than an hour, and you work on a small area (AR). 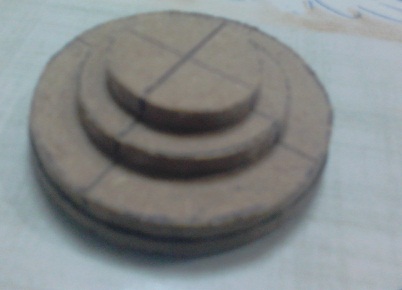 Retrieved from "https://beyblade.fandom.com/wiki/User:Fabio_Birrot?oldid=282341"
Community content is available under CC-BY-SA unless otherwise noted.