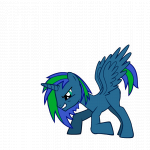 Hi, I'm JPace8921. And I am obsesed with beyblade! I don't really do anything else but play beyblade, research beyblades, watch beyblade videos and dream about beyblades! (Apart from school). I am 15 years old. But don't think I'm really dumb! I've made a whole new page for 'Beyblade Metal Masters: Episode 49' and 'Beyblade Metal Masters: Episode 50'. Unfortunatly, I don't know how to do links. But if you want you can check those pages out. Send me a message or something is you don't like something or like something I've done. But please don't sware. I have aproxamatly 80 Beyblade, 6 BeyWheelz 3 Stealth Battlers, 1 IR Spin Control, 4 Takara-Tomy, About 13 Fake Chinese Beyblades (Plastic Fusion/Metal Wheels), And ALOT of just normal Hasbro Performace Tops. Plus, I have the 'Beyblade Metal Masters Nightmare Rex' DS Game, which came with Nightmare Rex SW145 SD. But I do have alot of launchers: String, Rev-Up, Light Launchers, Normal Hasbro Launches, Mini Keyrings (I Didn't Count Them In The 80 Beys), Wind & Shoot and Grips. I don't really customise my beyblades. I've seen all the Beyblade Episodes so far (starting from Beyblade Metal Fusion/Fight). I've seen all Metal Fusion, All Metal Masters including english, I've seen them in Japanese too. I've seen all 4D and all so far of Zero-G. I check and see if there are new beyblade episodes everyday and every week. Sometimes every 4 days and sometimes every week. I've seen all episodes in Japanese and all so far in english.

Tuesday: Same as Monday but 2 is Swimming then all forwards is one number up.

Friday: Same as Tuesday, but 2 is Basketball.

This is what I try and do. I might have to do stuff with Dad or Mum. Or want to do something else. Or it might be a Public Holiday or School Holiday.

Beyblades I've Made Up

I've made up a few beys, which I dream to be in the series. Most likely it will never happen, but here.

The first bey is Core Wendigo RWED (Rubber Wide Eternal Defence) TCS (Tornado Claw Sharp). It is owned by Steve Hades. This would be the tallest beyblade in history, going up to 1200mm.

The face represents a monster, Wendigo.

The clear wheel has 10 spikes (5 on each side). It is not affected much by air attacks

The Core is a 4D wheel. It changes from Upper Attack to Razor Attack. You either put a sharp core in the top of the metal frame and its upper attack, or put it below and it is razor attack.

Then the RWED deflects attacks and absorbs them at the same time. It is a top-tier part. It is the tallest spin track ever, 770mm taller than 230.

The TCS has little claws all around the tip. Under that, is a spiral that acts like Down Force 145, incresing speed by 2% each spin.

Chain Soares is also part of the 4D system. It is owned by Nick Wayukian. When pheonix battled Doji, (MF46) the force from the special move in space created a merged bey. It has the power of wolf and fireblaze combined!

The motif is a wolf crossed with a pheonix.

The clear wheel has wolfs on the right and phoenix wings on the left.

The Chain metal wheel has a metal frame with chain like edges and a core that resembles the core of Cosmic Pegasus but with 6 blades.

The F:B is very complacated. The tip when launched is a sharp tip like the F:S. Then when it slows down, 2 almost half balls attach to the sharp and becomes ball.

Originally going to be Staircase Force SP230SS, Staircase Force is a very strong bey. It is my latest bey right now(8/12/12) I made it 21/11/12. This bey has brought back Spiral Force! SP230 was Spiral. But then SP came out as Spike. So i I made it Spiral Tornado. The owner is Yamiaku. (Yamiaku means dark evil in Japanese). Yamiaku found the scratched up Diablo Nemesis in the crater where Gingka killed the beast. The power of the star fragment came into Force and Nemesis disappered in the same manner as L-Drago Destructor and Storm Pegasus. Yamiaku is a Legendary Blader.

Just a plain plus symbol.

Force can control anything, even, like Gravity Destroyer, gravity. It can move trees, make tornados, make a hole in water, anything! It is nearly untouchable.

Staircase is a very unique metal wheel. The metal frame is 500mm tall in the form of a spiral staircase.but there is a hole in a side of the metal frame so you can put the clear wheel on and launch. The spirals meet in a point at the top. And around the point is a circle, which you can flip upsidedown, in the 4D system. I'll talk about it in a second. The core is just a thick circle core, which resemles Firefuse or Fusion's core. On one side, there is a little groove so the track can fit on. You can make it Complete Spiral mode or Diamond mode. Making it so the point is at the top is diamond mode. If there is the wide bit at the top, it's Complete Spiral mode. I'll tell you why next.

The track has a spiral going around the 230mm of the track. There is a little block that fits in the groove in the core. The tornado starts at the bottom of the track. So diamond mode would look like a diamond, and Complete Spiral mode would look like a tornado. In diamond mode, the bey can shoot the force (as shown in MM45) without a machine from the top. In Complete Spiral mode, the force comes out of the tip, making it able to actually fly.

Spiral sharp has a tiny spiral around the tip, like an uneven halo.

Hawk's face is a plain, hawk. Nothing much special about it.

The clear wheel has wings of hawks all around it and hawk heads.

210mm and made of metal. Once launched, it is 150mm and turns into a Hole Flat tip. As it slows down, it will eventually turn into an Eternal Sharp Tip and reackes 210mm again.

As you can see, I've made my lowest and highest beyblade. Galloop was made in 2010 and I was messing around with names. I made this when I watched Lighting L-Drago.

The face is a curled up horse.

3 sets of 2 claws facing right. The tips of the claws are made of metal. Has two modes with metal wheel

Just a normal track. Nothing much special, except that it's the lowest track ever.

This is my first ever made up beyblade, made in 2010 when i heard of 4D Beyblades. The owner is Sproubeter (Sprow-Ber-Ter). Sounds stupid huh? I was also messing around with names.

Retrieved from "https://beyblade.fandom.com/wiki/User:JPace8921?oldid=225950"
Community content is available under CC-BY-SA unless otherwise noted.