Oh look, a news post! I don't do these very often these days, but now is a better time than any to start.

The Beyblade Burst mobile app was released today (August 11th, 2016) on the Apple App Store in the US & Canada and, with this release and the release of some trademarks, a number of details have been revealed regarding both the mobile app and the toyline itself.

As expected, the Burst app follows the same style as it's predecessor, BeybladeBattles.com, in that you have virtual battles against opponents using parts collected from scanning product codes. Sounds very familiar, right? 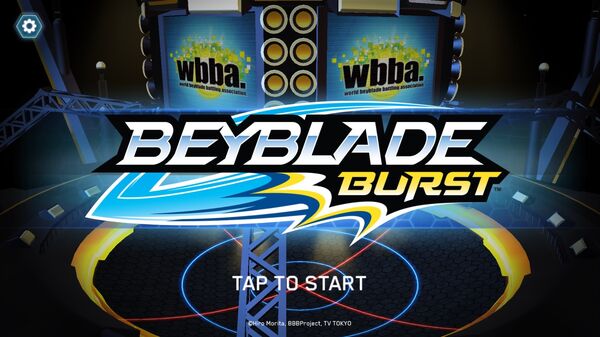 The battles follow the same Burst ruleset that is featured in Japanese tournaments; First to 3 points, 1 point for a Survivor Finish (TT Version: Spin Finish) and 2 points for a Burst Finish. Battles are performed in a BeyStadium reminiscent of the anime stadium, and each contestant is linked to a Stamina Gauge and Burst Gauge. If the Stamina Gauge hits zero, a Survivor Finish occurs. If the Burst Gauge hits zero, a Burst Finish occurs.

Players can interact with the battle by tapping on orbs of light that power up two skills that can be triggered;

The app also included localised names for a number of terms and Layers:

Datamining from the app also reveals that files related to Holy Horusood are currently included, but they have yet to be implemented into the game. Curiously, all files relating to Beyblades also use their Takara-Tomy names rather than their new Hasbro names, indicating that the app was in progress before names were finalised.

A number of Hasbro-filed trademarks have also surfaced today, revealing a plethora of names for Energy Layers, including some that Takara-Tomy had not revealed yet either. These are the following:

So many changes! With only Kerbeus, Horusood and Minoboros staying the same, and the introduction of Anubion, Ifritor and Phantazus, there are plenty of surprises in this list, so you guys will need to get used to these changes.

A heavy day for Beyblade indeed! With the Hasbro toyline just around the corner in the United States and Canada, the app's release signals the start of the western launch of the series. There's a lot to get used to if you followed the Takara version closely, so it might be time to start studying.

Editors; I do ask that you refrain from updating the Wiki with these terms. A editing bot will perform these changes soon, but the framework needs to be put in place to support these hefty changes. Furthermore, under no circumstances should it be assumed that any Dual Layers are to follow the same pattern as the ones we know. That means no Doomscizor D2 or Horusood H2, or even Ifritus I2. Assumptions are not fact, and this is not professional for a Wiki in any way.

Thanks for reading guys! What are your thoughts on these changes? Are you excited for the launch of Beyblade Burst this month? Let us know on Twitter @BeybladeWiki, in the blog comments below or on the WBO discussion thread, which has been rife with opinions this morning!