The spirit axle has a snake motif on it. It represents serpent, a slithering beast.

The spirit shield is big with orange spikes on all four sides. Included in this are two snake mouths, open and ready to strike.

The Venom Core is a Balance Core, but the small grips provide speed. The employment of the grips is a bad idea, as an error in launching will make it skate off to one side. Rub down the grips to avoid this problem, and to show off Venom's Power side. though on smooth surfaces such as glass, metal or ice, the spikes can come in handy as they clean on to the surface and won't slip(in real life and the anime) unlike most cores. Though raging still is a better choice for this.

The Attack Gear is large, with two cobra tales to cause high damage. It is strange that it is labeled for speed because it is at least a balance type gear if not a power type gear and is extremely heavy. Perhaps even the heaviest attack gear. 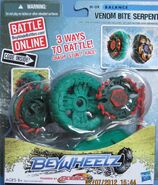 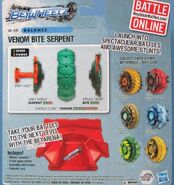 Retrieved from "https://beyblade.fandom.com/wiki/Venom_Bite_Serpent?oldid=300160"
Community content is available under CC-BY-SA unless otherwise noted.