The Attack Ring of Voltaic Ape, Mountain Hammer, is deceptively aggressive: while mostly round, the two Ape heads that are the focal point of its design produce a fair amount of Smash, however, in less aggressive setups, they produce a high level of Recoil, making this part highly unsuitable for Defensive customization, including most Compacts. Mountain Hammer does have some Smash Attack use, though the compact shape can be quite limiting. These combinations focus on using high weight to enhance momentum, and while this is usually not as effective as conventional Smash Attack setups, it can still be used effectively in a competitive situation.

Use in Smash Attack Customization AR:

This combination focuses on the bludgeoning effect from its weight and small size, as well as limiting the recoil of Mountain Hammer. It is surprisingly effective, given it breaks almost every rule of Smash Attack customization. It does have one significant limitation, however: it is noticeably less effective against opposite-spin opponents, and as such, is best only used against Beyblades which use the same spin direction.

Uriel 2’s SG Grip Change Base can be used for additional speed and power, however, it is a very fragile and expensive part, so this is generally not recommended. That said, it is arguably the safest combination to use that base in, as the areas which make contact with the base are relatively low-profile, meaning there is less stress on the weak gold plastic which the base is composed of.

Magnetic Weight Disk are Weight Disks with two distinct sides, North Pole and South Pole. It is possible to change the magnetic polarity of the Disk by switching between the two sides. Using this Weight Disk with a Magnecore will strengthen it's magnetic force and more irregular movement becomes possible. If two Bladers are fighting with the Magnetic Weight Disks, and both Disks have the same pole facing upwards, they will repel each other. This means that those Beyblades will never hit each other and the battle will become one of endurance. If the disks have different poles facing upwards, they will attract each other. This means that both Beyblades will consistently make contact and attack each other violently. Therefore, even Spin Gear System Beyblades battling in a stadium without magnets can utilise the Magnacore System by mounting the Magnetic Weight Disk.

Without a doubt, Defense Ring is the prized part of Voltaic Ape. It is hugely popular for Zombie customizations, and with good reason: it has notches that can steal spin from contact below the weight disk, it doesn’t interfere with the round perimeters of Wide Survivor and Wide Defense, the location and shape protects against Upper Attack, and it has excellent life after death, possibly the best of any Support Part.

Use in Defensive Zombie Customization

This combination is the standard Grip-Based Defender, a Zombie customization using the grip from Wolborg 2’s SG (Bearing Ver. 2) to withstand hard hits, while being able to steal spin, which counteracts the poor Survival of the tip. Defense Ring enhances this combination, giving additional protection against Upper Attack, and offering excellent Life After Death. In addition, this combination can be launched aggressively to score KO’s against opponents with very weak Defense who might otherwise outspin it. As such, it is easily one of the most powerful Defense customizations in the entire plastic generation.

Use In Zombie Customization

Defense Ring’s excellent life after death and Spin Stealing abilities make it one of the best choices for Zombie Customizations. The use of Burning Kerberous’ SG gives excellent stamina and stability, alongside decent ability to take hits when coupled with the round perimeter of the Beyblade. This combination is almost impossible to outspin without a specialized Zombie-Killing customization, though it does suffer from a weakness to Attack types.

Use In Compact Customization

Though Metal Change Base (Driger S) is generally preferred due to smaller size and lower height, the extra weight of Customize Change Base and Defense Ring, and generally less-aggressive tip, means they can still find their place amongst the best compact combinations. Defense Ring also helps compensate for the extra height, by giving some measure of protection against Upper Attack.

Customise Metal Sharp is a relatively tall base, consisting of a central pole and a relatively flat platform. The tip is a somewhat wide conical metal spike; however, as it loses balance, the plastic surrounds provide extra stability and aid in life after death, producing excellent stamina, and surprisingly impressive stability.

However, the height and shape, alongside extremely low grip tip make it an easy target for lower attackers, especially Upper Attack customizations, which can throw it around with little trouble. In addition to this, almost all stamina bases, including Customize Metal Sharp, are heavily outclassed by zombie parts, and as such this base is rarely considered for serious competitive use. 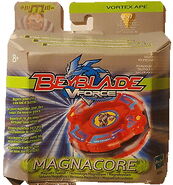 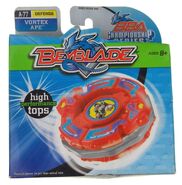 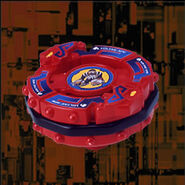 With an excellent Attack Ring and what is arguably the best Stamina/Defense Support Part, as well as a usable-if-outclassed Blade Base and useful-if-generic Spin Gear, Vortex Ape is one of the most useful releases of the highly acclaimed V2 Series. Every Blader should own multiples of this Beyblade.