Guess Who's Back in Town?

Vortex Ape is a Defense Type Beyblade and is Dunga's first Beyblade. This Beyblade evolves into another Beyblade of the same name. 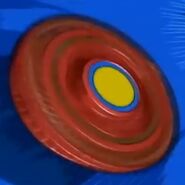