Vridick is a member of Team Chandora, representative team of India. His teammates are Salhan and Aniel.

Vridick and all the other members of his team seem to wear the same clothes. He has blackish-blue hair and has big dark bluish-grey eyes. Like the rest of his team members, he has abnormally large eyes.

Vridick first appears in Episode 19 along with other members of his team in a pre-match press conference, where he says their victory is assured. Where he proudly announces of his team's victory in the previous rounds where they all white washed their opponents but in the battle with Team Wild Fang, he battles Nile in the first battle, only to be easily beaten in a second by Nile's special move. He was shocked by his loss that the team thought he had lost it after 1 lose. He being part of Team Chandora, uses a Serpent bey. He can be very confident which leads to him being very upset when he loses. Aniel is probably normally the advanced guard in the tournament. 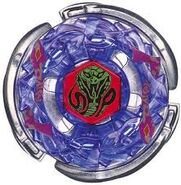 Storm Serpent in a Random Booster