The Face Bolt depicts "Horologium", one of the 88 constellations in space. Horologium is Latin for "clock" and is represented as a pendulum clock. The design features Horologium designed as a clock with four clock hands pointing North, South, East, and West with an eye in the center, as well as four other eyes between the hands. It resembles a Romanian clock. The design is black and is printed on a clear face Bolt.

Tempo is a circular Energy Ring designed to look like a clock. It uses a gear-like shape around it and features Roman numerals around the Ring along with two clock hands. The numerals are as follows, I, II, IIII, V, VI, VII, VIII, IX, X, XI, and XII. III is not present due; instead it is replaced by a small square-like hole.

Because of the hole as well as the clock hands, this causes Tempo to have an irregular type of weight distribution; making it terrible for Defense and Stamina customs, unless it is used with Basalt/Twisted. Tempo does have use in Attack though, specifically for Spiral. If Pisces is not present, Tempo can be made a substitute to reveal Spiral's main contact points.

Overall, besides Tempo being advertised as a bad Wheel, because it isn't. In fact, Tempo should never be replaced because of it's variety (with Twisted/Basalt), only if you must put it on Spiral. It is a transparent maroon in color. Custom:Spiral Tempo 90MF/WF

The Vulcan Metal Wheel has a total of two semi-circular prominences and two smaller wings painted with two red stripes that give breath to its design. Upon closer inspection, the two prominences have slight slopes that suggest the Wheel's capability of Upper Attack. Despite the fact that these sloped areas are major contact points, they do not provide Upper Attack; however, they do provide Smash Attack. Between the two prominences are the two smaller wings, which are also major contact points.

Having a total of four major contact points suggests the Wheel possesses an incomparable amount of Smash Attack. This wheel is almost completely identical to the Bull Fusion Wheel, but is heavier and better for attacking.In overall It is one of the best non-4D Attack wheels of all Beyblades.

The Track has 2 modes, one that increases the Attack (Normal Mode), and the other increases the Stamina (Boost Mode). It is proven that Boost Mode is better because when Normal Mode is in use, when it attacks or gets attacked, it hits the arena floor, decreasing the Stamina and predicts a perfect loss. However, Boost Mode is only accessible with Hades Kerbecs BD145DS, making it a stamina powerhouse. As an extra, you can take a red crayon and smear it over the BD145 where the text is. This will fill in the letters making them appear clearly. Use a paper towel to brush off any crayon not inside the letters. Rinse the BD145 to get rid of the crayon. This is not necessary though, because it almost looks like Egyptian text, making it impossible to read anything except for the words "Boost" and "Disk". It was first released with Hades Kerbecs BD145DS.

Rubber Sharp is disputably the best defense performance tip out there and is only available with the Beys Grand Cetus WD145RS, Grand Cetus T125RS, Inferno Byxis CH120RS. Like the name suggests, it is a version of the sharp performance tip that comes with beys such as Flame Sagittario C145S and is made of rubber. The rubber creates a lot of friction with the stadium floor thus making is very difficult to move the bey around or knock it over, much less knock it out of the stadium.It also moves very little and stays mostly centered in the middle of the stadium, providing further protection from attacking beys. Because the tip is made of rubber, it has very little stamina like all the rubber tips, but due to there not being much surface area in contact with the stadium floor, it does have more stamina than the other rubber tips. The large amount of friction that RS creates also fixes the main problem affecting the sharp series of tips, very poor balance. Altogether RS is an great tip but every Blader should own multiples as RS wears down after extensive use, reducing its defense. 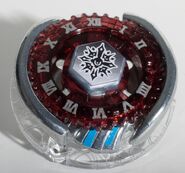 Retrieved from "https://beyblade.fandom.com/wiki/Vulcan_Tempo_BD145RS?oldid=375533"
Community content is available under CC-BY-SA unless otherwise noted.