Heavy Attack is a Weight Disk released as part of the Spin Gear System. It debuted with the release of Gaia Dragoon, and was featured in Random Boosters.

Heavy Attack is a part of the Heavy Series of Weight Disks. It is shaped like a hexagon, much like Six Heavy, but has circular notches on each vertex. While this is supposed to give more Attack power to the Beyblade, it is highly unlikely this Weight Disk will ever make contact with an opponent due to how small the Weight Disk is. Since Heavy Attack is lighter, and doesn't offer any helpful Attack, Ten Heavy is a superior choice in Defense, Compact, and One-Hit-KO combinations. This Weight Disk is only useful for those who do not own a better Weight Disk from the Heavy Series. 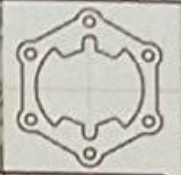 Retrieved from "https://beyblade.fandom.com/wiki/Weight_Disk_-_Heavy_Attack?oldid=404265"
Community content is available under CC-BY-SA unless otherwise noted.