Both releases have a sub-attack ring, but it is important to note the Takara versions have the sub-attack ring attached to the base, while Hasbro's has it attach to the Original attack ring like most beyblades.

This is the exact same blade base as Dragoon Galaxy. The only difference is that Gabriel has new stickers. 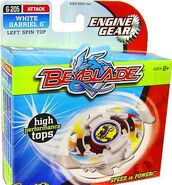 Add a photo to this gallery
Retrieved from "https://beyblade.fandom.com/wiki/White_Gabriel_G?oldid=390623"
Community content is available under CC-BY-SA unless otherwise noted.