Winning Valkyrie 7 Xtend (ウイニングヴァルキリー・セブン・エクステンド, Uiningu Varukirī Sebun Ekusutendo) is a Balance Type Beyblade released by Takara Tomy as part of the Burst System as well as the Cho-Z Layer System. It was released in Japan between April 28th, 2018 and May 25th, 2018 as a part of a Cho-Z campaign. If you bought up to 2000円 in Takara Tomy Beyblade Burst products from certain stores in Japan, you could obtain these parts.

“
The motif is of the goddess of battle, Valkyrie. An Attack Type Cho-Z Layer with 3 upper-shaped blades made of metal that cut through the opponent.
— Official Description
„

Takara Tomy's Winning Valkyrie is an Attack Type Energy Layer, the center features a feathered, armored face facing forward, akin to its predecessor God Valkyrie, meant to represent the Layer's namesake; Odin's handmaidens of Norse mythology, albeit changed to match the anime's rendition; an armored knight. Like its predecessors, Winning Valkyrie features three large wings as the primary points of contact, granting the Layer high Knock-Out and Burst Attack potential. As part of the Cho-Z Layer System, Winning Valkyrie features metal in its design; in this case, concentrated on the wings.

Like many other Cho-Z Layers, Winning Valkyrie is unbalanced which increases Burst risk, is liable to break Banking Patterns and drains Stamina. However, these issues can be solved with the use of a Level Chip that fits underneath the Layer.

7, like other odd numbered Core Discs, is an asymmetrical, elliptical disc that can facilitate a Disc Frame. 7 is designed similar to Gravity or Heavy, with seven designs jutting out that resemble the number "7". At first glance, the Disc looks unbalanced, but in reality, two of the sections on one side being halves makes it balanced. 7 is one of the heaviest Discs thus far, outclassed only by 10 and 0, and has a ideal weight distribution for Stamina Combinations. Its high Outward Weight Distribution (OWD) grants it not only the highest Stamina potential out of all other Core Discs, but its weight grants it high Attack and Defense potential without the severe Burst Risk of 8. With the use of Disc Frames, 7 can be used to great effect in any Combination.

Xtend is a Performance Tip with a manual height-change gimmick, akin to Metal Fight Beyblade's Change Height 120 Track and a wide flat base that has a small sharp tip protruding in its center, akin to a wider Fusion. Like Fusion, when launched straight down into the stadium, the protrusion in the center will keep the Beyblade stable and still in the center, preventing Stamina loss. When Xtend is either knocked off balance by an opponent or launched at an angle, the flat base will make contact with the stadium, creating an aggressive movement pattern with speeds equal to Assault. However this aggressive movement is unreliable as the protrusion can slow the Combination down in the center of the stadium or stop the movement entirely and the greater surface area makes it difficult to maintain a banking pattern.

By pulling and twisting the Tip, Xtend's height can be changed. When using Xtend's Lower Setting, it is the height of a standard Performance Tip, allowing the Layer of the Xtend Combination and the opponent to impact each other directly. When using Xtend's Higher Setting, in theory, its height would increase contact between the Xtend Combination’s Disc and Frame and the Opponent’s Layer. Such contact would prevent the Xtend Combination from Bursting and instead cause the opponent to Burst. In practice however, the height of most Layers and the minimal change in height means that there will be contact between the Layers regardless. Furthermore, Xtend's height change is less than that of Tower, a Performance Tip that already has performance issues due to too little height change.

When combined with the Xtend+ Chip, Xtend is classified as a different Driver and as such, any differences in performance will be listed on the Xtend+ page. 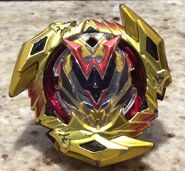 B-00 Info for Winning Valkyrie 7 Xtend.