Wolborg MS (ウルボーグ MS, Uruboogu MS) is a Survival-Type Beyblade released as part of the Heavy Metal System. It was first released in Japan as a Starter for 819¥. It is a Beyblade owned by Tala in the Beyblade Manga. Wolborg Metal Survive is the last Beyblade of the Wolborg series.

It is the first mold version of Bit Protectors.

Wolf Crusher is best used in conjunction with an uncustomized Wolborg MS. At first glance, it is deceptively aggressive looking. However, in actual performance it is very restrained. It has a circular, balanced form that lends itself well to Survival. It will not interfere with the life after death capability of the Circle Wide. However, this AR does not have many practical applications outside of being combined with Wolborg MS's Bearing Core.

Circle Wide is the largest but also the lighter of the three original HMS Weight Disks. It forms a perfect circle and the distribution of its mass is favourable to endurance and attack combos. It is benefit to endurance combos, as the remote mass axis increases the spin velocity. For attack combos, its light weight increases the speed and movement of the combo and places the weight on the projections of the Ring.

A heavier Circle Wide is included with the Takara version of Draciel MS. The increase weight varies between 0.5 g and 0.7 g and its effects are beneficial: This molding is preferred to the original in all circumstances.

The slots for sliding the metal disc on the running core are slightly smaller on the Sonokong versions Circle Heavy, Circle Balance and CircleWide as those of Takara and Hasbro. Taking into account the normal variations of the size of the weight disks , it means that the Sonokong Discs would fit more easily on the running core or will be incompatible.

Use In Endurance Combo

Use in Attack Combo

Main article: Running Core - Bearing Core
<onlyinlude>* Weight: 5 grams Bearing Core was one of the most highly anticipated parts at the time of its release, and it did not disappoint. Bearing Core remains to be unarguably one of the most important parts for every Blader to own. It has the best Survival capability of any part ever.

Bearing Core has a thick, sharp plastic tip attached to a metal shaft that runs into the Running Core. Between the shaft and outer casing of the Running Core is an NSK ball bearing, such as the ones present in previous Survival hallmark Beyblades. However, the Bearing Core completely outclasses every Survival part preceding it.

Use in Survival Customization

Wolborg MS works incredibly well as a Survival type on its own. However, it can be improved by many different types of customizations. You should try your own to see which ones work best for you. Here are just a few examples.

Bearing Core was a large source of controversy within the Beyblade community simply because of how powerful it is. In most stadiums, particularly Tornado Balance, its ability to outlast almost any other Beyblade was game-breaking in its effectiveness. There are very niche methods available to beat it, but this did not change the fact that it still outclassed almost every other part in the game. There were even discussions of banning the part.

However, Takara addressed this issue by releasing Tornado Balance Type S. By releasing a smaller stadium, Bearing Core lost its advantage as it was easily knocked out of the stadium.

How to Defeat Bearing Core-Based Beyblades

In Tornado Balance Type S, defeating Beyblades based on Bearing Core is easy because the stadium is small enough to allow for easy hits and knockouts. However, in most other stadiums defeating Bearing Core-based Beyblades is a chore because it is difficult to hit consistently. However, there are ways to do it. The following strategies are designed for best use in the Tornado Attack and Tornado Balance stadiums.

It must be noted that this combo is only effective if both it and the Bearing Core Beyblade are spinning in the same direction. However, that is the only variable that affects this Beyblade's performance in a significant way.

This combo works because the rubber on the Rubber Weight Core saps the opposing Beyblade's energy effectively and also uses Force Smash to push it into the stadium floor. Metal Ape is the best choice of AR for this combo because the high spin velocity lends itself well to the concept, not to mention that the shape lines up perfectly with Rubber Weight Core. Tests have shown this combo to have an almost perfect victory rate.

If you are a Blader who is skilled at shooting and knows how to control fast Attack-types, then this type of combo can serve you well. The goal is to hit the Bearing Core Beyblade as quickly as possible in order to KO it or hit it hard enough to stop it from spinning. Because Bearing Core Beyblades tend to sit in the center of the stadium, it is important that the Attack combo be shot in such a way that it moves through the center of the stadium repeatedly.

If you find it too difficult to control with the above RC, you can also try replacing it with Dragoon MS's Grip Flat Core. 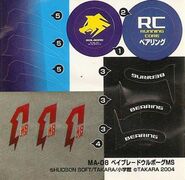 Package Back
Add a photo to this gallery

Wolborg MS bottom view
Add a photo to this gallery 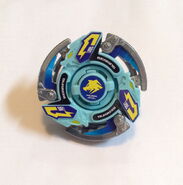 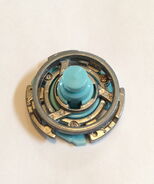 Bottom View
Add a photo to this gallery

There is little to say about Wolborg MS that has not been repeated ad-nauseum within the Beyblade community. Simply put, if you want victory and can only purchase one Beyblade, this is the one to have. Out of the box and uncustomized it is a force to be reckoned with, and customized its potential only increases. Only very skilled Bladers are able to defeat it with consistency. Game-breakingly good, this should be at the very top of your purchase list. All Bladers should own multiples of this Beyblade.

Retrieved from "https://beyblade.fandom.com/wiki/Wolborg_MS?oldid=290586"
Community content is available under CC-BY-SA unless otherwise noted.