Guess Who's Back in Town?

He appears to be a young boy who wears a navy green business suit. Wyatt’s suit also has a red tie. His eyes are brown, and so is his neat hair.

He is a very big fan of Kai. He follows him as often as possible, tries to get him interested, attempts to have a decent conversation with him, etc.

Wyatt is one of Kai's classmates from when he went to a private all-boy school at the beginning of Beyblade: V-Force called 'Whitney Prep School' . He follows Kai to his apartment, however he was caught and Kai reluctantly allowed him in. Wyatt observed the Beyblade champion's trophies and beyblades with much adoration. The two were then attacked by Dunga and Kai saved Wyatt by grabbing the back of his uniform vest and throwing him out of the window into a pile of carton boxes. Before that, when Dunga launched his beyblade inside the school building, Kai had also pushed Wyatt down to avoid him being hurt by Vortex Ape.

Later, Wyatt found a challenge note from Dunga which was originally destined to Kai. He went to meet the Saint Shield member with Kai's Dranzer and launcher. When Kai caught up with them on the building rooftop, he demanded Dranzer back but refused and wanting to prove himself worthy to him. Yet when he tried to call out Dranzer, he refused to be summoned by him. The impact caused by Vortex Ape sent shock waves that pushed Wyatt up over the fence that bordered the roof. Since Wyatt could have been killed from falling down the building, Kai jumped and saved him again. Kai then battles Dunga which ends in a tie. However, as the battle ended with Kai deciding to rejoin the Bladebreakers and get back into beyblading, Wyatt was left alone, still thirsty for Kai's recognition.

As he came back after Kai one day, asking him to be his apprentice, Wyatt was bluntly rejected by his idol. Slightly frustrated and seeking for mere acknowledgement from Kai, he was approached by Team Psykick's Dr. B, who trained him for some time and offered him a Beyblade and a Cyber Bit-Beast that would match Dranzer. Hopeful, Wyatt went back and challenged Kai. The latter declined, and Dunga showed up to battle the new Psykick recruit.

Although Cyber Dranzer's power really was to be feared at first, it really was too much for Wyatt since he had never experienced such a thing. The Cyber Bit-Beast was also feeding off Wyatt's energy to build its own strength, leaving its current owner completely insane. Near the end of the beybattle, Wyatt had practically gone mad and was totally exhausted. When the fight ended in his victory, Wyatt collapsed and died in Kai's arms. Wyatt's death is not mentioned or shown in the English dub, instead, it was said that he went crazy and Kai just said, "He was never the same again."

The guilt Kai felt afterwards for not simply helping Wyatt and therefore avoiding his death (which was turned into mental illness in the English dub) made Kai hallucinate during his battle against Goki because both he and Wyatt had the same possessed look due to Cyber Dranzer. It took the other Bladebreakers members to get Kai back on the right track because he would have otherwise lost the match, truly believing in the illusion he saw. 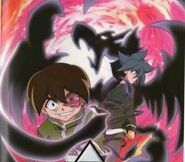