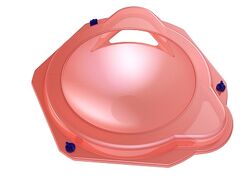 It's color appears to be that of a transparent red color. It also features two penalty pockets. Also it has a small flat circle in the middle.

It moves on the beys direction just like the Attack and Defense type stadium. It does not move as much as the Zero-G Attack Type Stadium because of the flat circle-like surface in the middle of the stadium. This gives it the same effect of the Zero-G Defense Type Stadium but to a smaller extent.