Zeus is a Balance-type Beyblade that belongs to Brooklyn.

This Customize Gear features a metal shaft supported by two bearings, suited for stamina. This configuration is similar to the bearings in Howling Spirit's gear.

Light Sharp is a CEW made of Polyoxymethylene (POM), making it generate less friction on the stadium floor, resulting in better stamina.

Zeus (TT-Hongli is a Fake Brand) 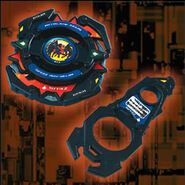 Retrieved from "https://beyblade.fandom.com/wiki/Zeus?oldid=419302"
Community content is available under CC-BY-SA unless otherwise noted.